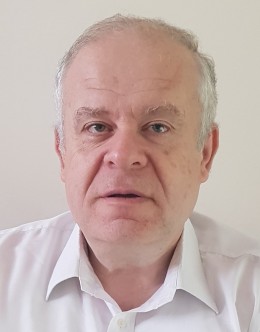 Zakaj FINI? »I am keen to establish fruitful collaboration with European and local industrial partners in order to implement via FINI network recent developments and multiscale mathematical modelling.«

He was awarded his PhD and DSc in Theoretical Solid Mechanics by the Institute for Problems in Mechanics at the Russian Academy of Sciences. He was affiliated with this institution until 2000, when he joined Manchester University. In 2005 he moved to Brunel University where he spent seven years before coming to Keele University in 2012. He has also held several visiting positions all over the world, including the University of Alberta, Bordeaux University, City University of Hong-Kong, Technical University of Munich, and Tel-Aviv University. At the moment he is affiliated at the Keele University (UK) and also at the Faculty of Industrial Engineering Novo mesto (SLO).

His research interests lie in the general area of physical applied mathematics, including continuum mechanics, acoustics, asymptotic analysis, and multi-scale modelling. He has co-authored over 150 publications in these areas. Amongst these are 3 books including the advanced research monograph ‘Dynamics of Thin Walled Elastic Bodies’, written in collaboration with L. Kossovich and E. Nolde. The key strength of Prof. Julius Kaplunov and his research group in the field of structural dynamics is their long-term experience of deriving consistent 2D models for thin elastic solids starting from the original 3D equations in elasticity. Together they have wealth of experience and for more than 30 years have worked on projects involving layered media supported, for example, by NATO, EU Commission and other industrial funding. In particularly, it has been recently established by Prof. Julius Kaplunov that low-frequency dispersion of harmonic elastic waves in a strongly inhomogeneous three-layered plate can be generally modelled by two-mode polynomial approximations. It has been shown that these approximations are uniformly valid for specific sets of contrast parameters, otherwise they take the form of the so-called ‘composite’ approximations.

He is a member of the editorial boards of several journals, such as Mathematics and Mechanics of Solids, International Journal on Mechanics of Time-Dependent Materials, IMA Journal of Applied Mathematics, PMM Journal of Applied Mathematics and Mechanics etc. He has also been editor of several scientific books, chapters and special issues of journals. As a member of several Scientific Committees, Program and Steering Committees, and Advisory Boards he has significantly contributed to the highest scientific level of many international conferences. He received several awards and honours, such as Alexander von Humboldt Fellowship (1992), Russian State Fellowship for Outstanding Scientists (1997), Russian State Annual Prize in Science and Technology (1998), given for Basic problems for thin walled structures, Russian Presidential Fellowship for Young Professors (younger than 40) (1998). He was appointed as Distinguished Visiting Professor at the Saratov State University, Russia (2001), Fellow of the Institute of Mathematics and Its Applications, UK (2006). Since 2011 a long-term industrial collaborative project with the USA Company AMSTED Rail, has been running in the area of Nonlinear Railway Dynamics. He coordinated the Brunel Research Assessment Exercise (RAE 2008) submission in Applied Mathematics. Nowadays he has been in charge of the Research Excellent Framework (REF2021) Keele University submission in Mathematics. Since 2018 he is the major leader of ARRS basic research project and collaborating researcher in the industrial project EAGLE.